Of Altitude and Adventure: Introducing Skiing in Nepal

Home > Blogg > Of Altitude and Adventure: Introducing Skiing in Nepal

There exists not a single skiing slope in Nepal, nor any local snow sports culture. At the customs I was asked if my ski bag contained golf cubs. In short, although the country hosts the highest mountains of the world, the Nepalese do not ski or snowboard. For now. The young entrepreneurs of the NGO Nepal Ski and Snowboarding Foundation (NFSS) work to change that and have been training over the last two years to become the country’s first skiers. In late 2017 I, supported by Pangaea Project, joined on a skiing expedition to Manang in the heart of the Annapurna Conservation Area. It was a story of literal and figurative ups and downs.

Before departure I googled ‚Nepal‘ and the first suggestion of the search engine was ‚Which country is Nepal in?‘ I took this as a hint that the Himalayan state is not as connected in our globalizing world as most other places.

However, I learnt that while most roads are not paved and the infrastructure is poor, especially the young people are connected and have ideas to shape their own future. For Utsav Pathak and Suraj Kafle this meant to found an own NGO and business – Ski Guides Nepal Treks and Expedition. 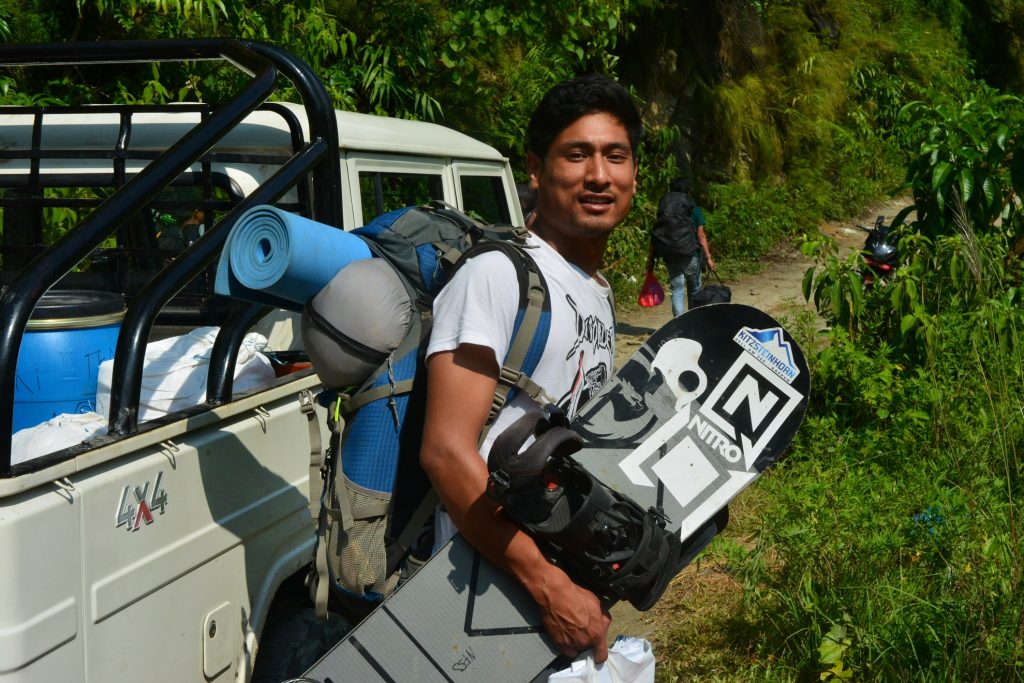 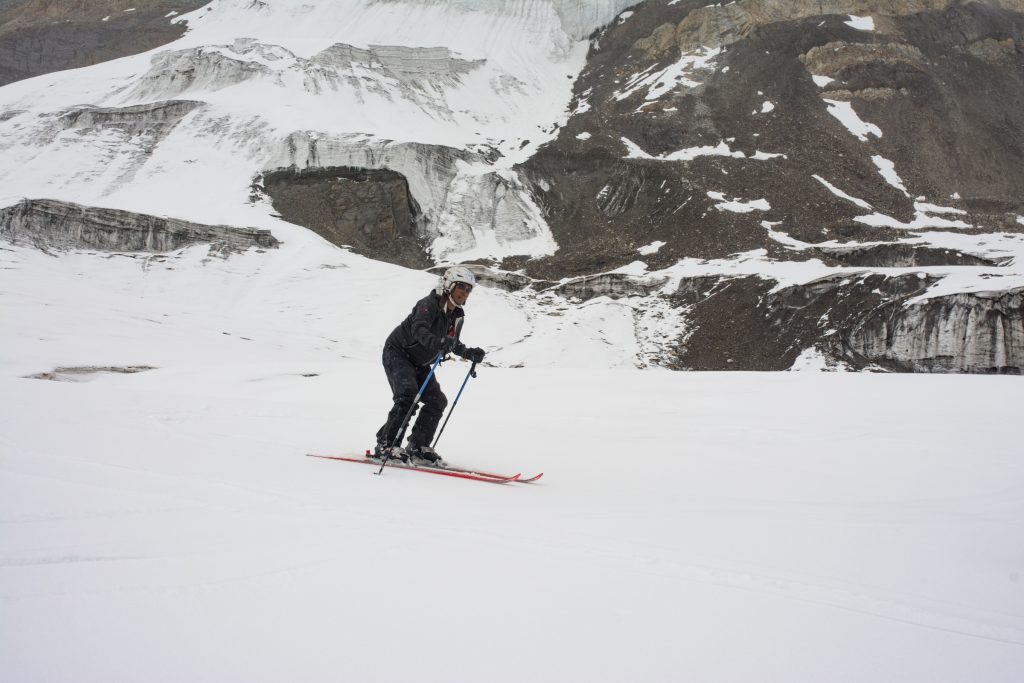 Their aim is to create jobs for the winter season by ski touring the Himalayas. On the other hand, the young entrepreneurs have a passion for snow sports and want to share it with their countrymen and -women. Just recently, in January 2018 they organized an event on the snowy slopes of Kalinchowk. In their endeavour to learn skiing they are joined by two dozen of Nepalese mountain guides and tourism students and are supported by a few international skiing instructors, first and foremost the Vienna-based Julius Seidenader. By now, they established the first skiing school of Nepal and the highest in the world.

That is about all I knew before the trip. And from the start I was not disappointed. The approach by plane to Kathmandu is stunning! The early morning sun rays shed a mystic light on the scenery of late bulky Monsoon clouds looming in front of the small plane window, only overshadowed by the majestic 8000+m peaks behind. I had arrived. 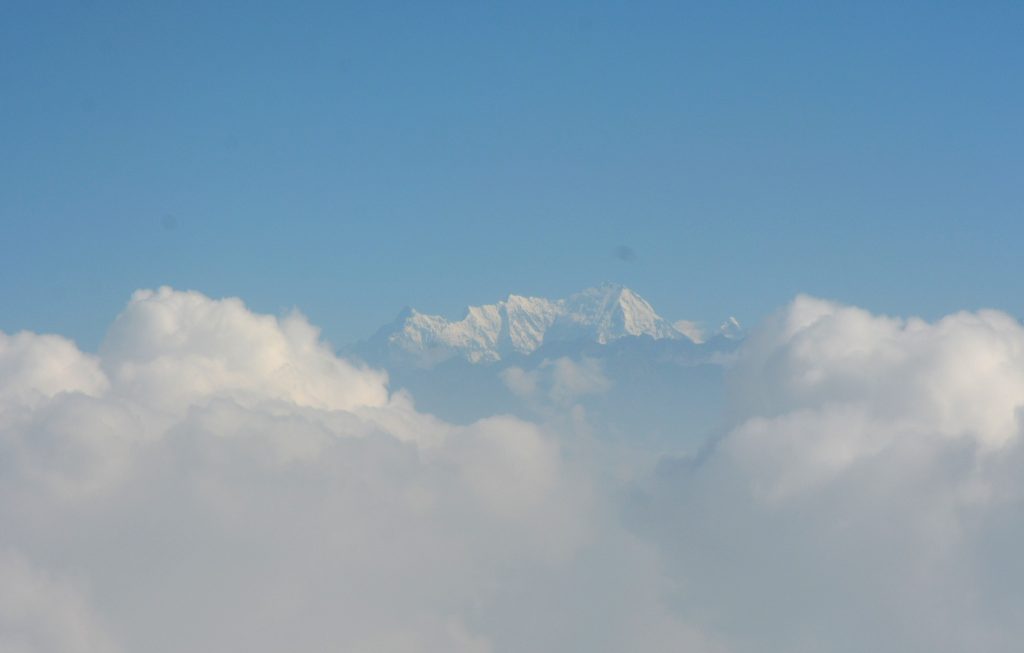 The time difference between Vienna and Kathmandu is exactly 4 hours and 45 minutes. Nepal certainly writes its own rules.

In Kathmandu we met the entire team and finished the final planning. The idea was to ascend with a team of around 20 the Kang-La pass on 5300m above sea level (asl) and then go skiing for a few days on the adjacent glacier. This was a first for everyone.

After three days we left full of excitement and in high spirits, packed with hundreds of kilogram of food, ropes, tents, and of course skis. 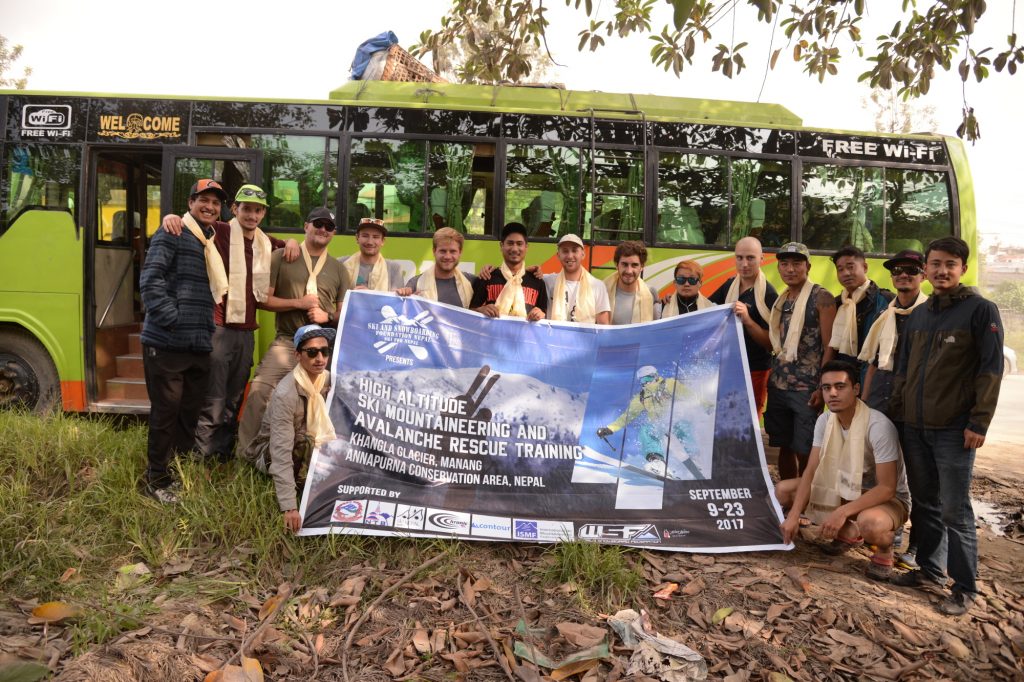 After a night in Beshisahar we started a 1,5 day jeep ride up the narrow valleys. We had to cross muddy landslides, repair a light machine and fear for our lives when riding on the small mountain roads with hundreds of meter deep canyons next to you. 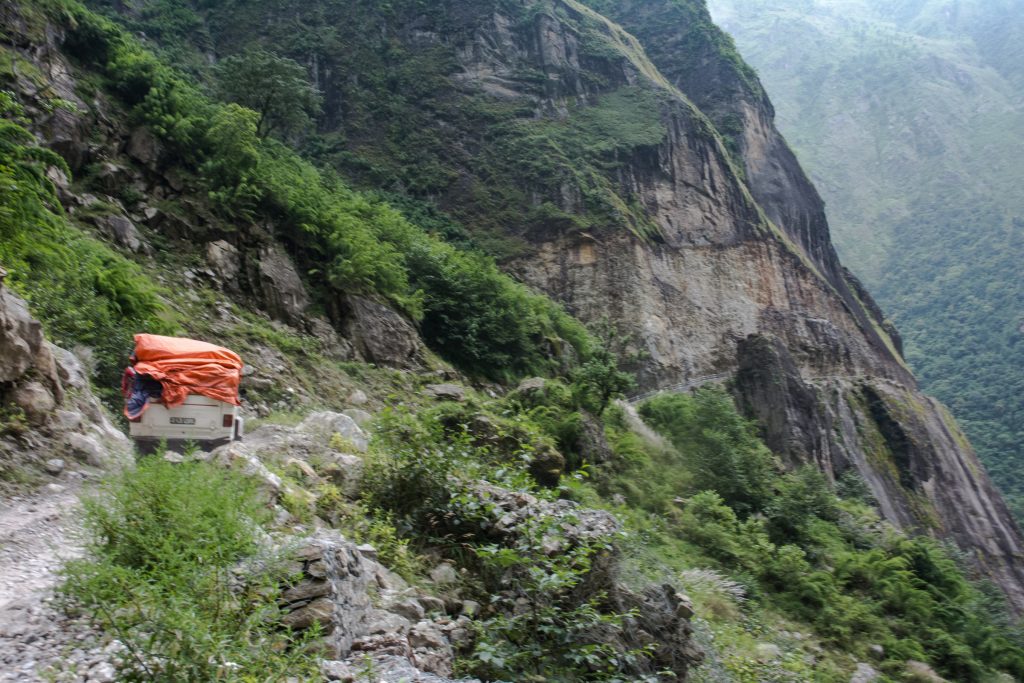 All arrived safe and sound, however, in our starting point in the mountain village of Ngawal on 3300m asl. By now, I had already learnt that skiing in Nepal takes a different kind of commitment. Finally, we started walking, the skis on the backpack and the food on our friendly mule carriers. 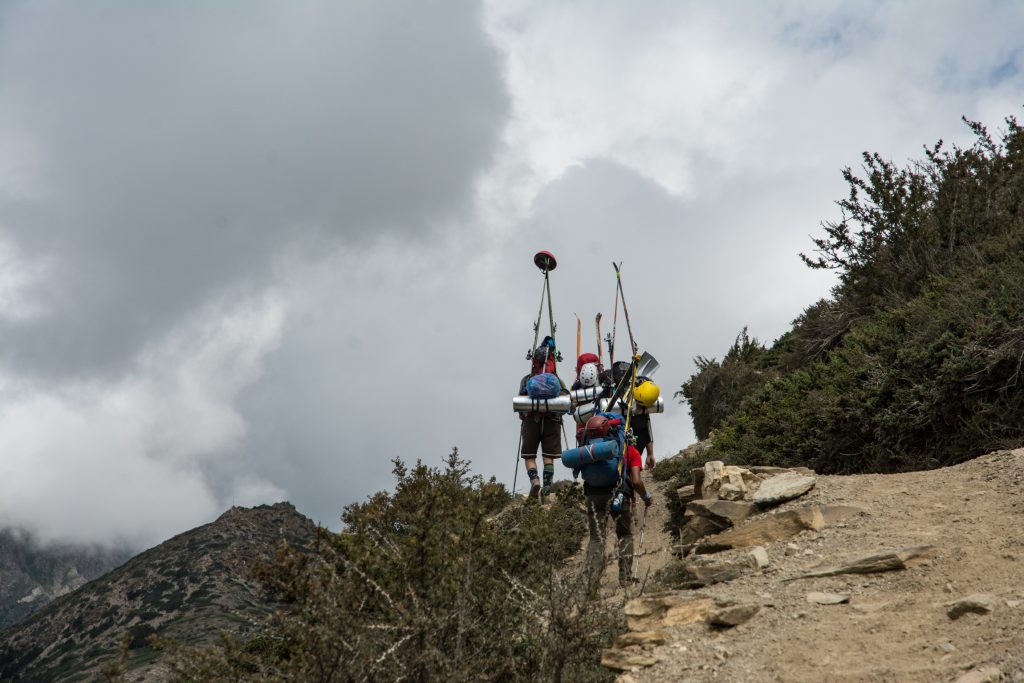 The intermediate camp on 4200m asl was breathtaking with a Windows screensaver like panorama of the Annapurna range, grazing yaks and a sunset where no filters are needed. The kitchen staff even ensured we had popcorn to go with the scenery and the obligatory garlic soup, which helps in the altitude.

The camp was also literally breath taking since I experienced already symptoms of altitude sickness. The head was pounding, I could not concentrate and dreamt of upwards flowing waterfalls. Clearly, we all were aware of the risks of altitude sickness and remained cautious. Still, the symptoms are ‘normal’. Also, physical fitness is no insurance and unfortunately one group member got sick and had to be flown out by helicopter. 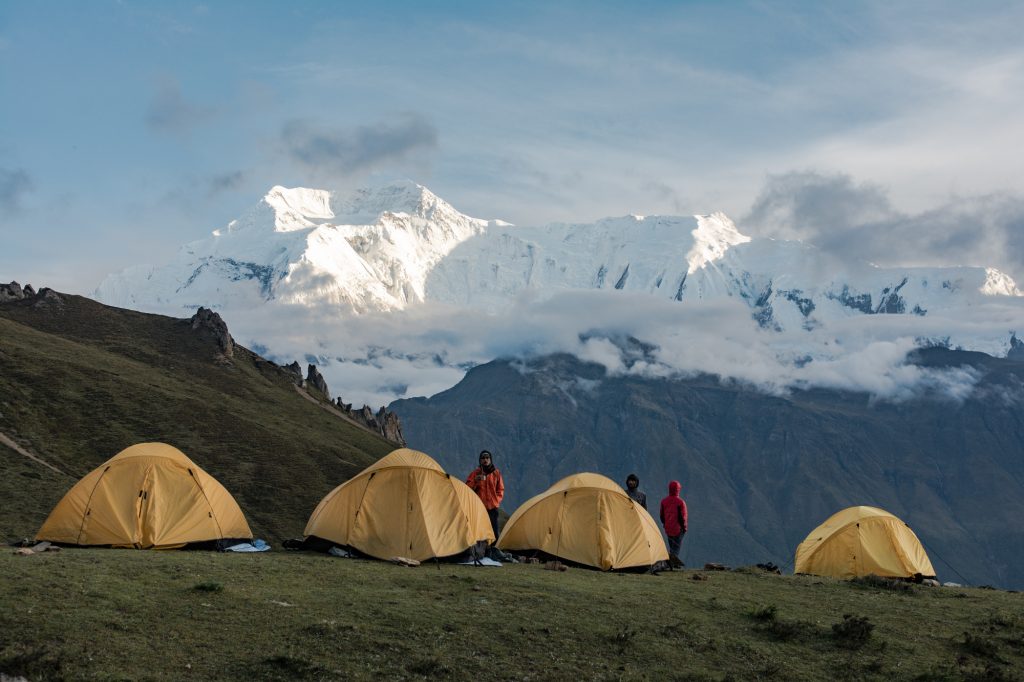 Then we started the main ascent to Kang-La pass on 5300m asl we all had waited for. The beginning was slow and steady, but after 5000m asl I struggled on the very steep path. My only thoughts were to put one step after another, not faint and control the heartbeat. With the prayer flags of the pass in front of me I walked in slow motion.

And indeed, I arrived at the high camp like a zombie, but still capable to drink tea and eat garlic soup. It was intense moments with happiness and pride that we had arrived and some worries about the group and our health.

The way up to high camp was intense and full of emotions.

Quickly, the device to measure the oxygen saturation in your blood became the new favourite toy. On 5200m you should have above 80% saturation. Some had as low as high 40s and I around 75%. The next day it was decided that a few descend to take no unnecessary risks. After a friend’s comment “You look like sh**”, I too decided to go down. Not an easy decision after so much preparation and excitement to go skiing on the glacier.

Back in Ngawal, the village where we had started, we felt much better and chatted. The next day, we had a group member who showed symptoms of HACE. Therefore, descended to the health station of Humde, where it was decided that three go back to Kathmandu.

Daniel and me walked on the Annapurna Trek to Manang village. There, we went to the talk of Himalayan Rescue Service. They explained altitude sickness is dangerous, but also normal for a short time and without long-term negative effects. Most affected are locals, who are not telling the symptoms and do not have access to medical services.

There was a lot of disappointment that I would not go skiing in the Himalayas.

At that point, I was disappointed and not eager to follow the stream of travellers on the circuit. Spontaneously over breakfast I decided to try the ascend one more time. My travel buddy did not want to join. After a short planning and good-bye I left. It was a beautiful trek a bit above the valley with views on glaciers and 7000+ m peaks. The valley is spotted by centuries old monasteries and stupas. After a lunch back at ‘our’ guesthouse and a message to the satellite phone up at high camp, I started to climb up with an idea in my head.

Acclimatized by now and with a much lighter backpack I reached the meadows in the trough before the pass. Hiking a bit more up, one of the local yak herders approached me amicably and asked where I was going.

Since it was late, the herder Wangyal invited me to stay with him and his friends in their hut. I was so happy about this hospitality and great help and agreed. Wangyal only said: “But now I go get my yaks.” I will never forget the time in the very simple hut with the yak herders. We did not speak many words of the same language, but laughed a lot together. 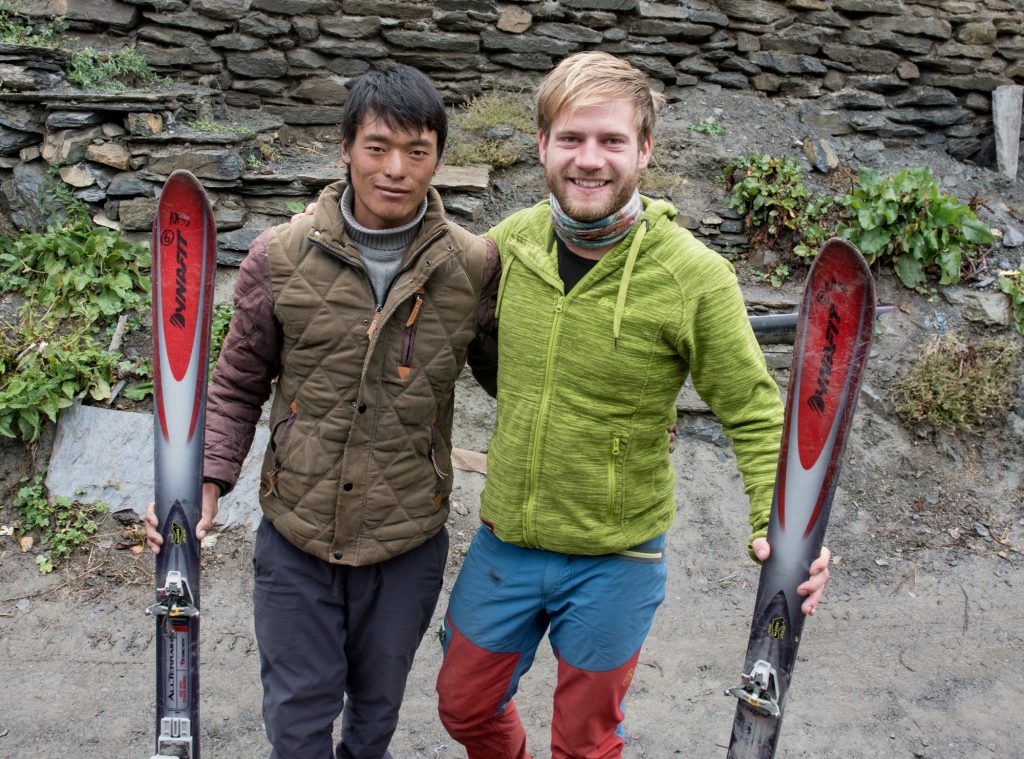 The next day after a hearty breakfast and ‘Tibetan tea’ (it involves a lot of yak butter…) I hugged my hosts and tried the pass for a second time. The path was steep and tough again. I did not have many thoughts other than the determination to reach high camp and go skiing.

“Aaaaaaaansgaaar”, the call that someone waited at the pass lifted my spirits. Eventually, we reunited at the high camp and everyone felt much better. I was more than happy to finally have reached in a good state and learned a lot about the compromise between safety and adventure. 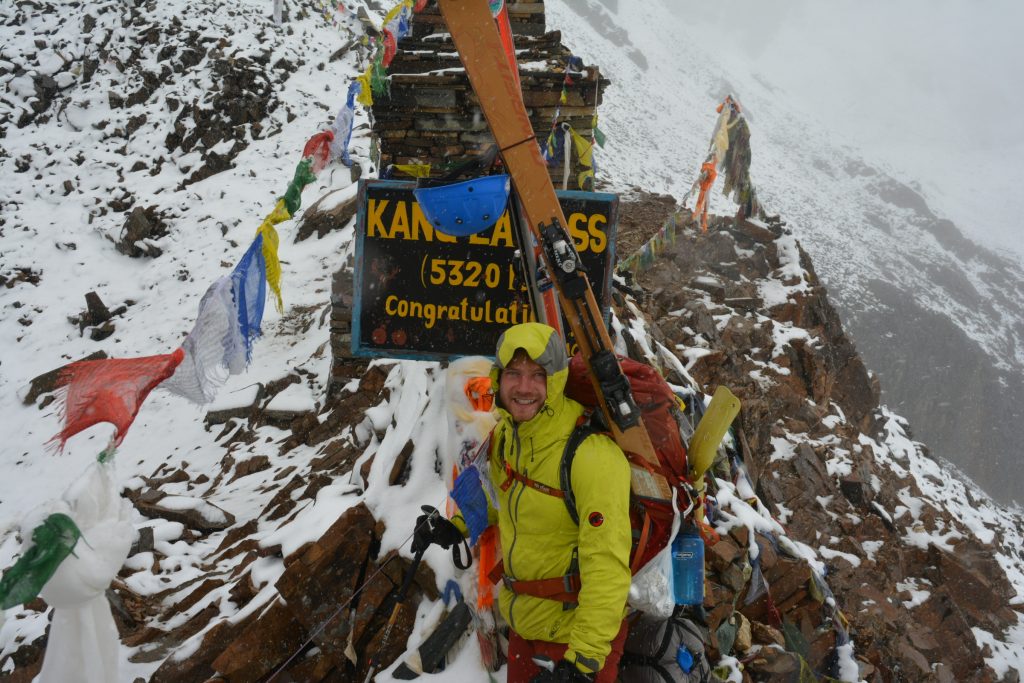 In the afternoon we went ice climbing on the foot of the glacier. One of the cooks told us that in the Himalayas, too, the glaciers are fast receding and we should take advantage of the conditions now.

The next two days we finally managed to go skiing on the Kang La glacier. After a 30min walk to our gear tent we put on crampons to safely reach the top of the glacier. There, we put the skins to walk up the slope. Although not comparable to conditions in the Alps, the skiing was great with no visible crevasses and certainly less people (none) than in Austrian skiing resorts. 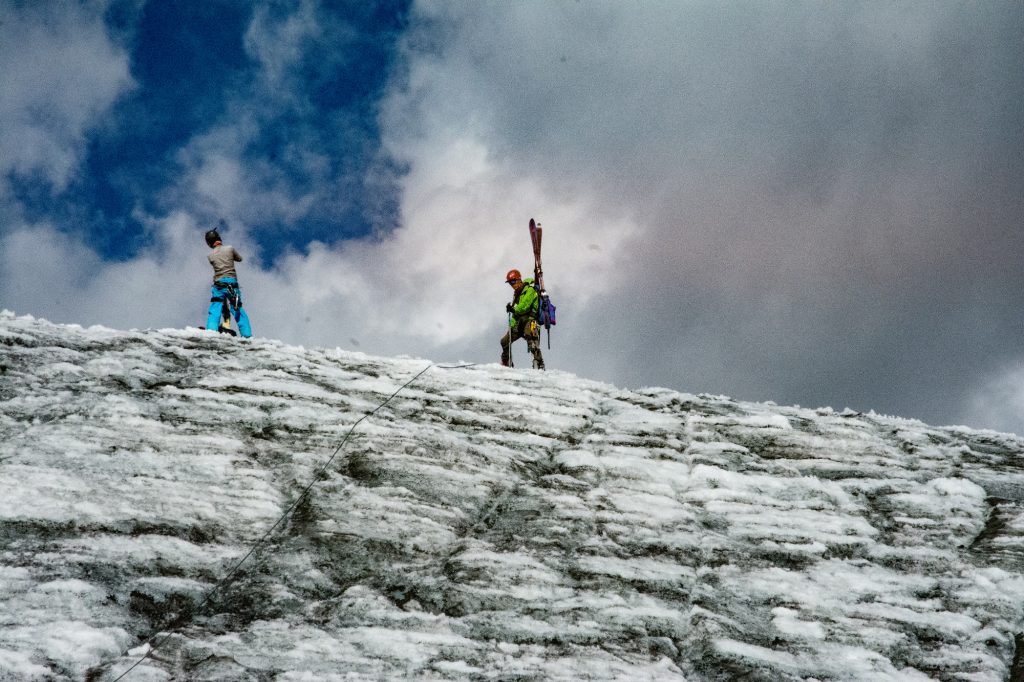 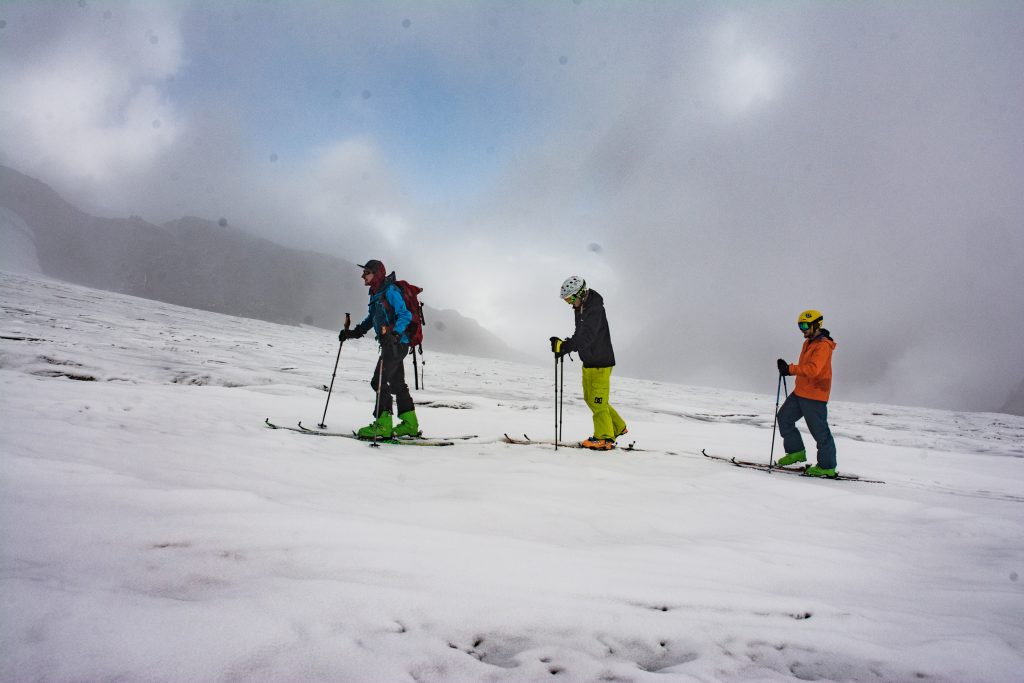 The Nepalese ski students were highly motivated to learn and try the skis. And this passion is already half the rent. With more practice and experience, I am convinced they will succeed in becoming the first Nepalese ski mountain guides. The last day it snowed heavily with great skiing conditions, but we had to descend and realize that in the Himalayas you don’t make the rules, but adapt to them.

Next to these unique experiences, I am happy to also take new friendships from this journey. For sure, we will hear more about the guys and girls from Nepal Ski and Snowboarding Foundation!