Reconsidering our consumption society and what to do with plastic bottles

We wanted to see a group of young Kiwis do something completely remarkable.
We wanted to inspire them and give them an opportunity of a lifetime.
We wanted to spread a message: Single use plastic is harming the environment.

We wanted to combine all of these things into one ambitious project. And so, with this still vague task at hand, Shruthi (Amazon Expedition) and Dan began to let countless ideas and sketches stream onto paper about how we could achieve this. We had to come up with a plan to empower a passionate group of young people to raise awareness about the harmful affects of single use plastic and we wanted to do it in nature’s very own playground: New Zealand. 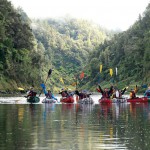 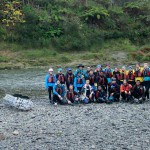 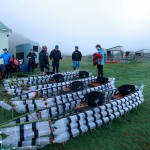 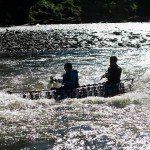 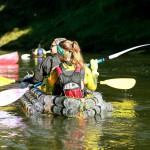 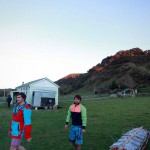 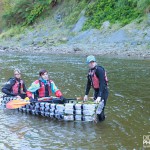 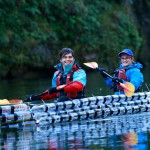 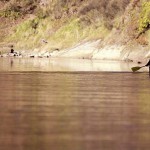 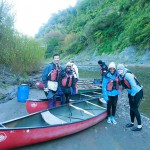 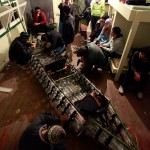 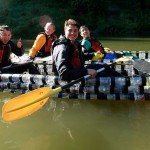 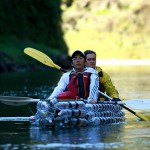 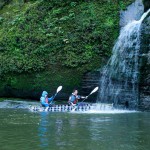 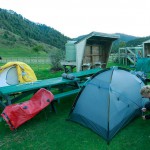 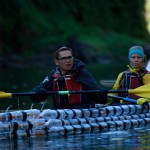 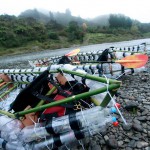 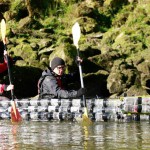 “We wanted to do something remarkable: travel more than 100 kilometres on our own kajaks, built of plastic bottles.”

With the amazing work of an extremely talented team of architects, engineers and volunteers, the PBK Expedition slowly started turning from a dream, into a sketch, then a prototype and finally a reality.

After three weeks of intense work and sleepless nights, our kayaks were ready. And so, on a cold crisp May morning, our team of 25 youth carried four PBKs 500 meters from our campsite to the river’s edge, ready for the adventure to begin. The strategy was clear: eight participants would be kayaking in the PBKs, whilst the remaining participants would be in supporting Canadian Canoes for a few hours at a time, rotating throughout the day so that everyone would get to paddle on a PBK. It was happening. Or at least we thought it was, until we faced our first obstacle: as two participants hopped onto the first kayak, the rest of the team watched as the product of our labour sank dangerously low in the water. Our engineers were baffled. We had tested these kayaks, we had seen them float before. I stood on the side of the river with my heart in my throat, disguising my fear that our dream may collapse on the starting line.

Our design team quickly spotted the issue and went straight to work. It turns out that because of the varying weights of the two people in each PBK, some combinations would require counterbalancing at the front or back of the PBK either with large rocks or buoyancy aids to bring it level. It was moments like this, and many others along the 100kms, that our three person design team transformed into superheroes and saved the day. Whether it be running repairs as the PBK’s were floating down the river or a 6am restrengthening of the frames – our team ensured those kayaks made it to the finish line with all paddlers safe and sound.

The shallow rapids throughout the first day on the Whanganui provided all our team with a sharp and steep learning curve, and the realisation that being extremely vigilant whenever entering a rapid was essential for safety. Not one hour into our journey, and we came across two gentleman who had split their kayak on a rock downstream and had no way of getting out of the valley. We turned on our emergency locator beacon and once they were rescued, it became very clear to our large group that a safe journey was paramount.

Whilst hard work and perseverance dominated our days, it was laughter, deep conversation and bonding that took over our nights. Each night in the huts along the river, we would set camp and have a debrief on our day, talking about our strengths, weaknesses and each participant would share one specific piece of encouragement with another kayaker in front of the whole group. As the hours went by each night, our incredibly diverse team, with members ranging from professional kayak instructors to some who had never set foot in a kayak before, became aware of how there was a real sense of being one team, together, making it down the river as one.

“In the nights we bonded, encouraged each other and laughed.”

The final day of the expedition was the ultimate test for our kayakers and our PBKs. The sections of the river with the biggest rapids and the highest chance of capsizing were fast approaching. To our utter amazement, every PBK made it through the rapids unscathed with no capsizes, whereas on the largest rapid with a one meter drop, one of our Canadian Canoes capsized. Fortunately, no one was injured, they were just a little bit cold.

As the final kilometers of our journey were completed, the feeling of awe and gratitude amongst our team was almost palpable. Everyone was sharing their favourite moments, and how they had found the beauty of the Whanganui to be something incredibly special. But above all, we realised that we had done it. That 25 young people set sail on PBKs down the Whanganui river because they wanted to spread a message that the way we currently are using plastic, especially single use plastic, is not sustainable and is not benefiting our planet in any way. That reaching the end of the journey was symbolizing that when people come together with a common goal, any dream can be turned into a reality. Even the reversal of the way that our society consumes and disposes of plastic.

“We want to raise awareness that our use of plastic is not sustainable!”

Our world may be a big place, but the way we consume and what we throw away has repercussions felt in big metropolises and on small islands alike. The Plastic Bottle Kayak Expedition was not about a group of New Zealanders on a New Zealand river, but rather a statement and a call to action, for all of us, no matter where you are, to reconsider what can be done with plastic.

Do you already know… 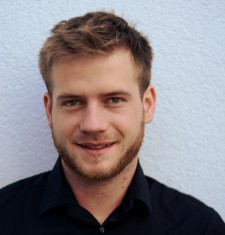