I helped to construct a house for two weeks this summer. But it was not a house like any other house. It was an « Earthship ».

But what is an « earthship » and where does it come from?

Starting around the 50s and 60s, in reaction to the post-war boom, to mass consumption
and to the Vietnam war, the situation in the United States became contentious. A counter culture movement promoting a return to nature began to rise and to expand in every domain.

In architecture, a lot of alternative constructions rose all around the States such as lightweight,
ephemeral, mobile constructions, inflatable structures, shelters, and other communal ways of
living that were sometimes integrating alternative technologies (wind, solar, water energies).
It is in this context that in the 70s the architect Michael Reynolds created and developed the
earthship community in Taos, New Mexico.

What is an earthship made of?

Earthship is inspired from old construction techniques and is integrating sustainable technologies.
It is made of natural materials such as earth, and recycled and local materials such as tires, cans, plastic and glass bottles and cardboard.
Earthships are also autonomous and bioclimatic, which means that they take into account climate and environmental conditions to help achieve optimal thermal comfort inside.
They capture energy from the sun with solar panels, from the wind with wind turbines, collect
water from the rain with a cistern for household activity and re-use water with a system of plant filtration.
The autonomy an be reached by planting edible plants inside the house and in the garden.

Now, more than 300 earthships have been built around the world and around 6-7 houses in
France. 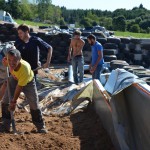 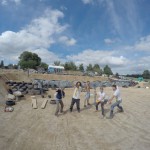 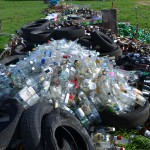 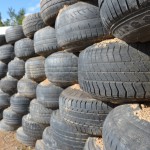 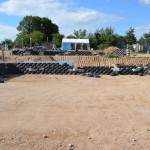 A community volunteering project in Dordogne (France) :
When I heard that a French association called « Habite Ta Terre » (« Inhabit your earth »), with young people that had been formed by Michael Reynolds in Taos, wanted to build two earthships in the region of Dordogne in France, I got in touch with them and joined for two weeks in August.
When I went there, they were still building the main walls of the two houses, composed of earthfilled tires.
It was quite physical to fill the tires with a sledge hammer, but I learned many other things, and we had great fun.
Sometimes, 10 volunteers were helping with the project and several days after, we could be up to 40 people, coming from everywhere and every fields.
We had some big talks after working about the financial system, about permaculture (holistic
system and ethic to respect the earth through agriculture, architecture …) and other subjects, and everyone was sharing his or her own knowledge.

I learned that together with a few people, a bit of knowledge and a lot of motivation, new ways of living could be created.
The aim of this project is not only to build two houses, but to reunite people, to re-dynamise the village and to achieve something together.

A great experience for an architecture student
As the house is supposed to get finished around June 2016, I want to go back to help during my
holidays to see the evolution of the earthship construction.
As an architecture student it is for me a real experience to see people building their own houses
(with no architects!), to learn construction techniques (that we don’t experience at school) and
discover other ways of living.
I think earthships are a really interesting alternative for the countryside if designed according to the climate, context of the site and if they are constructing a local dynamic.

To find more about (also where the pictures are coming from):
Michael’s Reynolds work :