Following the trail of 400 year old Russian history, an international expedition of twelve dogsleds covered roughly 200 kilometers – and I was in the midst of it. Some months ago I could not imagine myself dashing through Russian snow on a sled pulled by six strong Siberian huskies. I was studying in the Netherlands when Dima, the photographer of Mike Horn’s Pangaea Young Explorers Program, invited me to join this expedition. I didn’t know what to expect exactly but I was curious to learn about Russia and its culture as well as how to be a musher.

I arrived in St. Petersburg in February and spent some days there with Dima and the four Spanish expedition participants. Javier (he worked for Mike as a cameraman), Susana, Maria and Antonio were great to explore the city with. We quickly learned that in Russia, even broad rivers like the Neva freeze over, that Russians love the sun in winter and that they have very good food.

After a very long night-train ride, we arrived in Kostroma, the capital of the Kostroma region and basecamp of our expedition. Here, Maria (from Moscow, Magnetic North Pole expedition) joined us. Communication turned out to be slightly cumbersome as only Maria and Dima spoke Russian and English – and only Javier and Susanna spoke Spanish and English for translating to Maria and Antonio who didn’t speak English…But despite those difficulties, we learned everything about dogsledding and how to talk to dogs in Russian.

I was a bit worried at first when I heard that everyone would be on a sled alone. What if I couldn’t do it? If I had a problem? Then I took my first short ride on a sled with four dogs and I didn’t worry anymore. I was just full of joy and happiness. I loved the feeling and forgot about the cold temperatures around me. I knew it was going to be fine.

The expedition preparation didn’t only consist of training. A city tour, visiting a spring festival and traditional puppet-making were included. We also had a presentation about security, the historical context and the legend of Ivan Susanin. The latter is said to have sacrificed his life for the young soon-to-be Tsar Mikhail Romanov by misleading Polish soldiers who wanted to kill the teenager. We were going to follow the reverse route that Mikhail took to find shelter in the Ipatiev monastery in Kostroma.

When I heard each of us would steer a dogsled on her own, I was worried. But then I was just full of joy and happiness!

The start at the monastery was a big event with TV cameras, music and a funny guy who kept the kids entertained. I was impressed that so many people had come to see us leave. We waved goodbye and covered the first part of the journey on the frozen river. We stayed in Kostroma for another night before our route took us first to Barskoe, then to Medlevki and Domnino, the village where Mikhail hid with his mother. 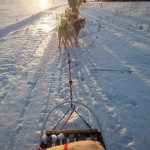 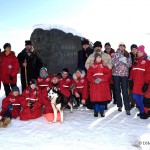 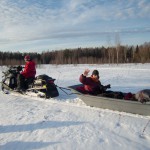 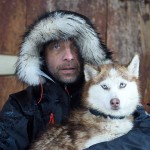 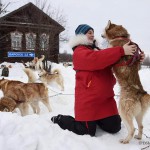 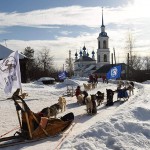 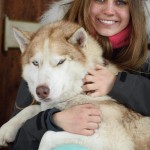 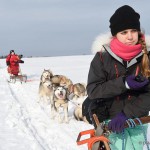 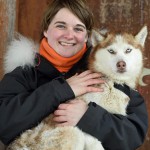 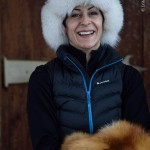 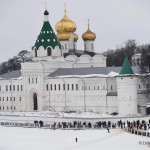 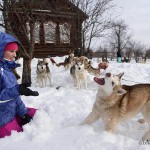 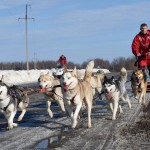 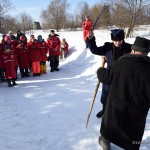 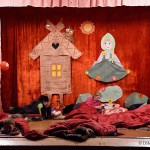 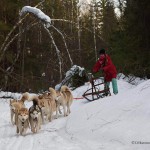 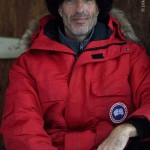 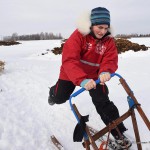 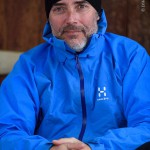 We only made slow progress on the second day. It was unseasonably warm which made the snow soft and the task more difficult for dogs and humans. I tried to get my dogs used to my voice and shouted “Давай! Dawaii! Go!” and “Стоять! Stajat! Stand!” a lot. But in reality, they only “listened” to what I did with the brake. As soon as I let it go, they would run until I pressed it really hard again. We arrived at our accommodation after sundown and were welcomed with bread and black salt, a tradition in this region. But the day doesn’t stop when you arrive and are really tired and only longing for bed. First, the dogs need to be freed from their harnesses and have dinner (meat and water). This takes a while – we had 72 dogs! Only then it was dinner time for the human participants. Afterwards we had the chance to experience a real Russian sauna that is called banya here.

The next day was the longest. We had 43 km ahead when in the very morning my sled broke. Not only did one screw go missing; due to the soft snow, I couldn’t brake properly and the plank holding the brake broke too. I somehow managed to stop and was a bit desperate. What now? There was no way I could go on without a working brake. Luckily, the Russian mushers and one of our ski-doo drivers helped out. They gave me another sled and said I should continue while they repaired mine. I was very glad to have those people around me before but at this point I would not have been able to go on without them. I now could enjoy the changes in landscape from open fields to swamp to birch forests. I couldn’t stop looking around. Also when it got dark, I didn’t feel tired but excited what I will see next. That night we slept on the stage of a theatre. It was part of a very small village that consisted mainly of ruins, a big horse stable and a small shop.

On the following day, we had very warm weather again and clear skies. It was perfect for taking pictures but difficult for the dogs because they prefer colder conditions. When the sun started to go down, we saw a white and blue church on a hill. We had reached the turn point of our expedition, the village Domnino. We were accommodated in private houses and I was once again astonished by the hospitality of Russian people. Although they didn’t speak the same language, the Spanish men had a nice chat with the homeowner and the girls were invited to banya by his wife.

The morning program was one of the highlights of the trip. Followed by two TV teams, we took a short detour to the stone that acts as memorial for Ivan Susanin and his story. Two actors made the history of 1613 come alive and replayed it. After taking loads of pictures and giving interviews, we started our way back. Unfortunately, the warm days prior showed their effect on the streets. The asphalt was coming through and my dogs of course preferred running there instead of the part of the street where there was still snow. For me that meant running with the sled to not damage it and shouting “Лево! Leva!” (Left!) what didn’t impress the dogs at all. Luckily we returned to the forest paths again where there was still enough snow.

The sixth day was the coldest of the whole week. Until now I didn’t know how easy it was to go over hard snow. Nevertheless, we had to cancel the last day and the final kilometers back to Kostroma because of bad snow conditions and weather forecast. So we spent the following rainy day mostly inside and had time to relax, sleep and reflect. In the evening we celebrated the successful expedition, shared our experiences and especially thanked our very important interpreters.

I am happy to have been part of this expedition. I learned that you don’t need to speak the same language to communicate or to have fun. I made friends with people I could hardly talk to. I saw the beauty of Russian winter. I experienced hospitality and kindness all around. I had the chance to build a relationship with those amazing huskies who never grew tired of pulling. I now know some simple words in Russian and I hope to need them again someday soon. Увидимся!

Website of Olga’s Husky farm (in Russian): http://husky44.ru
Maria’s article in Discovery Russia (in Russian): http://discovery-russia.ru/index.php/puteshestviya/rossiya/item/1999-zametki-na-sobachem-oshejnike
A report about the expedition in Russian TV (in Russian but worth a watch even if you don’t understand it): http://www.1tv.ru/news/social/278839
Susana’s blog (in Spanish): http://veohitos.blogspot.co.at/2015/03/huskis-y-ruskis-expedicion-ivan-susanin.html